Did you know that GE Hitachi has a Uranium processing factory
at Lansdowne & Dupont in Toronto??
Not many of us did, so now we are trying to find a solution. 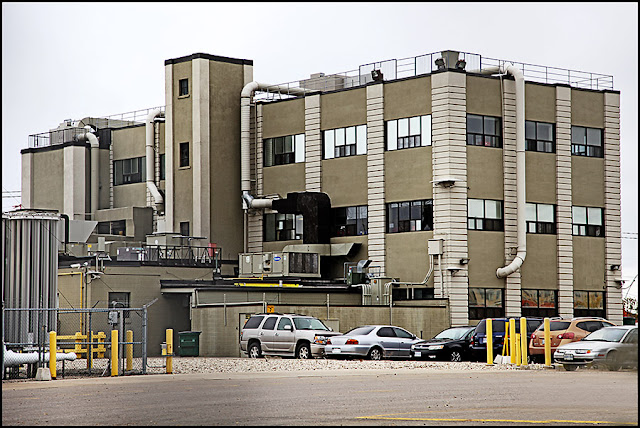 To find out about & join the community group on FaceBook:

We had out first community meeting on November 15th 2012 and are currently planning the next.

At the first meeting we tried to bring in a panel to introduce the subject and educate ourselves of potential dangers. Next we are trying to compile the information we got from the meeting as well as build a Q&A page to try to answer all the questions put forward at the meeting. Keep checking back as we aim to add lots of information here. Our next meeting we will make sure we have a large Q&A forum so that everyone can speak their mind.

Email ThisBlogThis!Share to TwitterShare to FacebookShare to Pinterest
"There's a GE Hitachi plant that processes uranium for the Canadian nuclear industry right on Lansdowne and Dupont. You probably never heard about it because practically it's been kept a secret. The Canadian Nuclear Safety Commission renewed the license for that plant in 2010, knowing that there are trucks lugging radioactive material in and out of the residential area in which the plant is located. Remember that these regulatory Boards and Commission are automatically biased towards the industry they regulate until the public pressures them into actually scrutinizing anything. Even if the plant is perfectly safe, it's just not right that the residents had zero say in the license renewal. But we all know it's not perfectly safe." - Johnny Dib

VIDEO LINK to a Mini-documentary on this issue:
http://www.youtube.com/watch?v=Bt5H25V9cAI&feature=plcp

Email ThisBlogThis!Share to TwitterShare to FacebookShare to Pinterest
An excerpt from the license renewal hearing with the Canadian Nuclear Safety Commission Sept 30 2012 in Ottawa. http://www.nuclearsafety.gc.ca/eng/commission/pdf/2010-09-30-Transcript-GE-Hitachi-Hearing.pdf

A member of the commission asks GE about whether the community around the Toronto plant know what is going on inside:

MEMBER GRAHAM: Also -- and I don’t want to jump around because I had a series of questions and I want to follow the slides first, but I do want to come back to changes within the financial guarantee in the PDP if and when you start doing the enrichment; but I’ll come back to that later because I just want to finish with the slides first -- your slide deck. The public information is one of the areas cited by the Commission, and my question is to GE-Hitachi. What type of public information program do you have in place at this time?

MR. MASON: For the record, Peter Mason. Well, we do have a website that we post information. We also keep people within half-a-kilometre around the facilities informed of what we are doing.
Our understanding from our dialogue with the Commission staff was that there were three shortcomings that we had in terms of our public information process.
First of all was our procedures, and we’ve updated those procedures.
The second one was our website was lacking, and I thought that we had brought that up to the requirements, but we’ll check on that one.
And then the third one, which we didn’t realize was required, was a media analysis and we’ve recently had our media -- or public relations department in at our head office in Toronto do a media analysis of all of the related articles to our business and, in particular, Toronto and Peterborough. So we have sent that to the Commission.
So hopefully we have addressed the shortcomings that were identified by the staff.
MEMBER GRAHAM: You do send out newsletters to the one-half kilometre radius people in the area, keeping them informed?

MR. MASON: When we make changes or if things are happening, yes.

MEMBER GRAHAM: How often? Would that be several times a year or only once every two or three years?

MR. MASON: I would say -- yeah, it’s really associated with changes, so it’s probably only once every two or three years. It’s only when we have something to say really.

MEMBER GRAHAM: I guess just the awareness that there is radioactive material being processed across the street from that row of houses we see and so on, are the people aware of that? I mean, are there -- does the signing show that?
In Toronto, it’s a very large complex, right? Or your facility is doing more than just that. And Peterborough is doing more than just that, than processing pellets or processing -- making the bundles and so on.
So you are doing other things at that site, but are the people aware that there is radioactive material on-site, say, across the street from where they live?

MR. MASON: For the record, Peter Mason.
If we look at the Toronto site, yes, at one time it was a very large GE site.

MR. MASON: Today, we are the only remaining ---

MEMBER GRAHAM: Oh, you are the only one?

MR. MASON: --- GE business on that site.
In fact, much of the GE campus that was there has been sold off to developers and, in particular, on the west side of Lansdowne Road that has been developed.
On Brandon Avenue, we -- I think we have a long history of dialogue with the residents there. We’ve probably spent half-a-million dollars in beautifying the area, which has been very well received by the residents there.
In Peterborough you're quite correct in that the large industrial campus which is GE's and as I mentioned earlier has been there since 1892, has two businesses, the nuclear business and the motor's business. The motor's business takes up the largest portion of the site and has the largest number of employees.
As part of our application for low enriched uranium fuel, we had several public hearings. We had meetings with the school, parents and teachers, and the local leadership. So people are well aware. We've been there for 50 years. They're well aware of the sort of thing that we do there.

MEMBER GRAHAM: Will you, in this licensing period -- do you anticipate moving your Toronto operation because it's small down just to that very valuable land for other development moving it and consolidating it all in Peterborough?

MR. MASON: For the record, Peter Mason.
No, we have no plans to move the Toronto facility. It's very efficient, very well run and one could not justify the cost of consolidation to move that to Peterborough.

The Peterborough Occupational & Environmental Health Coalition
(O&EHC‐P) is pleased to be supporting the Lansdowne & Dupont
west‐end “community’s right to say NO” to the uranium
processing at the GE Hitachi plant. We are concerned for workers
and communities in which uranium can put both at risk.
In Peterborough citizens and labour formed a coalition to support
safe and realistic measures to deal with the residual toxic waste
from a long history of old industry in Peterborough; and to ensure
fair compensation and support for injured workers and their
families affected by both the impact of asbestos and combined
chemicals in the workplace.
Our common concerns with local residents living near the GE
Hitachi plant ‐ for the safety of workers and community residents
in and near industrial workplaces ‐ make us natural allies in raising
awareness of risks to workers’ health and safety.